Recovery teams tried and failed to pump water away from a passenger jet that crashed in a central African swamp.The weekend crash of Kenya Airways Flight 507 killed all 114 aboard. 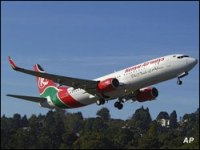 Rain complicated the recovery of bodies from the jetliner submerged in the swamp just 5 kilometers (3 miles) from the end of the runway where it took off early Saturday on a flight from Douala to Nairobi, Kenya.

Kenya Airways chief Pilot James Ouma told a Nairobi news conference on Tuesday that the Kenyan crash investigators at the site now believe Flight 507 crashed about 30 seconds after takeoff. Officials in Cameroon had said earlier that they lost contact with the aircraft 11-13 minutes into flight. The investigation has just begun, and the discrepancy could not immediately be explained.

The jetliner's flight data recorder was found late Monday in good condition, increasing chances investigators would be able to determine how and why the plane plunged nose down into the swamp. The flight's cockpit voice recorder was still missing.

It took nearly two days to find the wreckage, most of it submerged in murky orange-brown water and concealed by a thick canopy of trees. For reasons that have yet to be explained, the plane stopped emitting signals after an initial distress call, slowing the search.

Kenyan official said Tuesday they would like the flight data recorder to be examined in Canada, but acknowledged the decision would be made by Cameroon. Officials in Cameroon refused to say whether there was any conflict with Kenya over the flight recorder or crash investigation.

"Our goal right now is to get as many of the bodies out of the mud as possible," said Thomas Sobakam, chief of meteorology for Douala airport.

At the crash site, one team gathered personal effects and a second was dedicated to recovering human remains. Sobakam said that so far the remains of 28 of the 114 people on board had been retrieved. He said some had been identified based on identification found with the remains.

Bodies were being found in pieces and badly decomposed after more than 40 hours in the water. The stench of death and spilled fuel permeated the air.

Xavier Clopaire Noa, a Cameroonian firefighter acting as foreman of the search, said the muddy hole where the plane fell was inundated with water.

"We tried to empty it a few times but the water keeps coming back in," he said.

The pumps that had initially been installed to suck out the water were turned off.

A plastic wallet insert containing a few dozen Chinese business cards and handwritten notes floated on the muck. Makeshift paths had been designated through the crash site in an attempt to direct traffic and preserve the site.

Lydienne Eyoum, a lawyer, had two friends on the plane, both employees at her Cameroon-based law firm. She walked back through the brush from the scene Tuesday weeping.

"I couldn't believe it," she said. "But I wanted to see it to understand, because there are so many questions and no answers."

Kenyan President Mwai Kibaki declared a national day of mourning Monday and, in a televised address, offered condolences to friends and relatives of the dead.

"I wish you the strength and courage to overcome the tragic loss of your loved ones," he said.

Flight 507, a six-month-old Boeing 737-800, sent a distress signal shortly after takeoff Saturday from Douala. Its departure had been delayed an hour by storms. Cameroonian officials said it lost contact 11-13 minutes later.

A source close to the airline's investigation, who spoke on condition of anonymity because he was not authorized to speak to the press, said Monday the early investigation focused on a theory the plane lost power in both engines, perhaps because of the storm, and did not have enough altitude to glide back to the airport.

However Ouma, Kenya Airways chief pilot, said Tuesday that Kenyan investigators now believed that the plane crashed just 30 seconds after takeoff. Ouma and other Kenyan Airways officials declined to give the reasons for that conclusion and said only that they would have to review the transcripts to see if there was contact with the aircraft until 11-13 minutes into flight.

Ouma noted that the wreckage was found on the flight path and close to the airport. However, procedures for losing all power in an aircraft call for the pilot to try to return to the airport along the same path. The plane also crashed nose-first, consistent with a plane stalling as a pilot desperately tried to coax it along the glide path.

Among the 105 passengers was Nairobi-based Associated Press correspondent Anthony Mitchell, 39, who had been on assignment in the region. Nine crew members also were on board.

An American, Dr. Albert Henn, was also on board. Henn led the Nairobi-based Liverpool VCT, which provides AIDS treatment and testing in Kenya. He has a home in Massachusetts.

Initially, the search focused on the rugged, forested area near the town of Lolodorf, about 140 kilometers (90 miles) southeast of Douala.

Sobakam said officials were led astray by an incorrect satellite signal, possibly emitted from the plane.

Fishermen living in the swampy mangroves near the Douala airport reported hearing a loud sound at the time of the crash.

While air travel in Africa is notoriously perilous, Kenya Airways is considered one of Africa's safest airlines. The last crash of an international Kenya Airways flight was on Jan. 30, 2000, when Flight 431 was taking off from Abidjan, Ivory Coast, on its way to Nairobi. Investigators blamed a faulty alarm and pilot error for that crash, which killed 169 people.