A device on the top of a car in a casino parking garage exploded early Monday, killing a man who tried to pick it up. 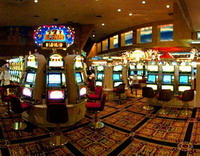 The blast shortly after 4 a.m. on the second floor of garage behind the Luxor hotel-casino was not considered a terrorist act police said.

"This appears to have been a small device that was constructed in such a way to target a single individual victim," Deputy Police Chief Ted Moody said. "It was successful in doing that, unfortunately."

The victim, who was pronounced dead later at a hospital, worked at a business inside the hotel, police said, adding that the case was being investigated as "a homicide with an unusual weapon." Another person who was with the man narrowly escaped injury and was cooperating with investigators, police said. Their names were not released.

Police spokesman, Officer Bill Cassell, declined to describe the device, but said initial reports that it was inside a backpack were wrong.

No threat had been made against the Luxor, Cassell said.

Moody said investigators were reviewing the surveillance videotapes from multiple cameras in and around the two-story parking structure.

Gordon Absher, a spokesman for MGM Mirage Inc., which owns the Luxor, said the casino was not damaged and, except for the top floor of the parking garage, the resort continued normal operations.

Aerial video showed no apparent damage to the garage, where entrances were blocked while police, firefighters and federal Bureau of Alcohol, Tobacco, Firearms and Explosives agents investigated.

There was little damage around the vehicle, police said.

Immediately after the explosion, entrances were sealed and authorities went vehicle to vehicle with bomb-sniffing dogs. Later, people were allowed to remove their vehicles after an inspection, Absher said.

Several hours after the explosion a report of an unattended bag prompted a brief evacuation of the race and sports betting area inside the casino. Police were called about 11 a.m. and a bomb squad determined the bag was an empty computer case, a police spokesman said.

Absher said there was no connection between the incidents other than "awareness was heightened" among employees.

The Luxor, a pyramid-shaped hotel at the south end of the Las Vegas Strip, has more than 4,400 rooms and 4,200 employees.