Three police officers and three suspected militants were killed in a gunbattle in Chechnya, a law enforcement official said Monday. 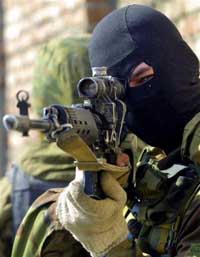 Police clashed with the suspected militants Sunday near the village of Khatani in the mountainous Vedeno district in southeastern Chechnya, regional Interior Ministry spokesman Magomed Deniyev said. Some of the fighting took place in a house where the militants had been staying, he said.

Two riot police officers and an Interior Ministry serviceman were killed, along with three suspected militants, and four police were wounded, Deniyev said.

Separately, a policeman was fatally shot while he and others were detaining a suspected militant in the southern Shali district, the agency reported.

Russian forces have fought two wars against separatist rebels in Chechnya over the past dozen years. Large-scale fighting has all but ended, but rebels continue to fight Russian servicemen and forces from the Moscow-backed government, and the insurgents regularly inflict casualties on Russian forces with booby-traps and remote-detonated explosives.