A Kenya Airways jetliner that plunged in a central African swamp was broken into pieces no bigger than a car door, a muddied searcher said Monday as he emerged from a night at the crash site. The plane was missing for nearly two days before being found overnight just 20 kilometers (12 miles) outside Cameroon's commercial capital. 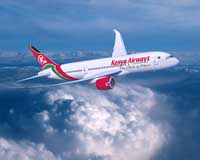 There was no information on survivors. The searcher, Guiffo Gande Adolphe, said he had seen one body and a body part, an arm.

Adolphe, a 35-year-old Douala resident, said he went to see what he could do after hearing wreckage had been found, and ended up among a handful of volunteers and soldiers who spent the night at the site. More rescuers and searchers were headed to the area Monday morning.

Adolphe said that so far, only small pieces had been found - a seat, a sheet of metal. At one point, he held up his hand as if he were holding a baseball to demonstrate the size of a piece of wreckage he had seen.

Dozens of rescue workers and journalists walking through the swamp at night had reached the edge of the crash site late Sunday, but did not immediately find survivors. Reporters said they had found only small, scattered pieces of wreckage before they had to abandon the search because of darkness and deep water. Teams said they would resume at first light and follow the debris trail in hopes of finding the main part of the wreckage.

While the site was not remote, it was in a dense and hard to access mangrove forest. The road in was dirt track, its ruts filled with water Monday after heavy overnight rains. The last stretch to the site could accommodate only foot traffic - a large Douala airport truck had become mired in the mud overnight. Adolphe and the others emerged Monday covered in mud, carrying shoes they had taken off to wade into the swamp.

In Nairobi late Sunday, the Kenyan capital, the chief executive of Kenya Airways said he had no news on the plane's condition or about the 114 people who were on board. "We have no confirmed information about survivors or any possible casualties," Titus Naikuni told a news conference.

The wreckage was found about 20 kilometers (12 miles) southeast of Douala, along the Nairobi-bound plane's flight path from the Douala airport - more than 40 hours after the Boeing 737-800 lost contact with the airport. The crash site was concealed by a thick canopy of trees, Naikuni said.

The cause of the crash remained unclear.

Flight 507 had departed from Douala airport early Saturday, an hour late because of rain, with 105 passengers and nine crew members on board. The plane issued a distress call, but then lost contact with the radio tower between 11 and 13 minutes after takeoff, officials said.

It was not immediately clear if the plane deviated at any point from its flight path.

The search initially focused on the thickly forested mountains near the town of Lolodorf, about 140 kilometers (90 miles) southeast of coastal Douala. Officials had been led to believe the plane had crashed in the vast, hard-to-access forest because of an incorrect satellite signal, possibly emitted from the plane, said Thomas Sobakam, chief of meteorology for the Douala airport.

Fishermen living in the swampy mangroves near the Douala airport reported hearing a loud sound at the time of the suspected crash.

"It was the fishermen ... who led us to the site," Sobakam said. "It's close enough that we could have seen it from the airport - but apparently there was no smoke or fire."

Drenching rains also might have camouflaged the smoldering wreck in the nighttime hours immediately after the crash, officials said.

Among the passengers was Nairobi-based Associated Press correspondent Anthony Mitchell, one of five Britons on a passenger list released Sunday by the airline. Mitchell had been on assignment in the region.

Other passengers include executives from the South African mobile phone giant MTN and the nephew of Indian tycoon Ramesh Chauhan, the owner of Parle Products, a leading manufacturer of biscuits in India.

Officials said it was too early to tell what caused the plane to go down so quickly after takeoff.

"Whatever happened must have happened very fast, which is usually a sign of catastrophic structural failure," said Patrick Smith, a U.S. based-airline pilot and aviation expert.

"A plane never takes off into a thunderstorm, no crew or carrier would allow that," he said. "But it is remotely possible that the plane could have inadvertently gone into some extremely turbulent air and suffered massive hail damage or a sudden structural failure."

One of the many unanswered questions is why the plane stopped emitting signals after an initial distress call. The plane is equipped with an automatic device that should have kept up emissions for another two days.

An exhausted battery could be one reason, said Capt. Paul Mwangi, head of operations for Kenya Airways. "It is very unlikely, but the device can actually be destroyed. The impact would have to be very, very severe," he said Sunday.

Family members gathered in Nairobi and Douala, many weeping.

"Oh my last born, my last born, where am I going to go?" Kezzia Musimbi Kadurenge, the mother of a missing crew member, said in Kenya. "I'm finished."

Kenya Airways is considered one of the safest airlines in Africa. The Douala-Nairobi flight runs several times a week, and is commonly used as an intermediary flight to Europe and the Middle East. The airline said most passengers were to transfer to ongoing flights in Nairobi.

Naikuni said the plane was only six months old.

The last crash of an international Kenya Airways flight was on Jan. 30, 2000, when Flight 431 was taking off from Abidjan, Ivory Coast, on its way to Nairobi. Investigators blamed a faulty alarm and pilot error for that crash, which killed 169 people.