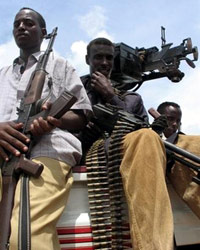 It was unclear how many people were aboard the ships when they were stopped Wednesday off Somalia's semiautonomous Puntland region, said Andrew Mwangura, head of the Kenyan chapter of the Seafarers Assistance Program.

Mwangura said the boats were Finnish fishing vessels, but Matti Kaariainen, the Finnish ambassador to Kenya, said Puntland officials had told him that the vessels are from Egypt.

"These vessels are not from Finland," Kaariainen said, citing the vice president of Puntland. He had also been told that the vessels were stopped because of illegal fishing.

Puntland's Information Minister Abdirahman Bangax said he was not aware of the incident.

The 1,880-mile (3,025-kilometer) coast of Somalia, which has had no effective government since warlords ousted a dictatorship in 1991 and then turned on each other, has emerged as one of the most dangerous areas for ships.

Also Thursday, the powerful business community in the capital, Mogadishu, handed over 25 boxes and 20 sacks filled with weapons, heeding the government's call for the gun-infested city to disarm. The government is trying to establish full control over the city after an Islamic insurgency sparked some of the worst fighting here in 15 years.

Abdi Qeybdiid, a former warlord who is the new police chief in Mogadishu, and other officials there refused to comment on the number of weapons handed over Thursday.

"We urge all Somalis and the other business people to disarm," said the AU troops' spokesman, Paddy Ankunda.

Businessmen in Mogadishu for years have set up their own security to ward off marauding gangs of militias.

"The reasons we acquired these weapons no longer exist in Mogadishu, so we don't need them," Ahmed Kheyre Abdi, a businessman in the capital, said at the handing-over ceremony.

Since civil war broke out in 1991, he said, businesses had been forced to provide "everything a government should be doing, such as electricity, water and security. We had to reinvent the wheel."

Somalia has been mired in chaos since 1991, when warlords overthrew dictator Mohamed Siad Barre and then turned against each other. A government was established in 2004, but has failed to assert any real control throughout the country.