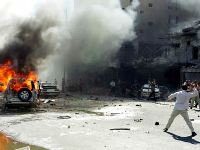 A suicide car bomb exploded near a police station in the Iraqi capital on, killing at least six people and wounding nine.

The attacker smashed into two police cars parked at an intersection about 50 meters (yards) from the Rafidayn police station in the Shiite slum of Sadr City, police said.

The blast occurred about 7:30 p.m., when the sun was setting in Baghdad, and the fatalities included two policemen and four civilians and the wounded six civilians and three policeman, police said.

Several other civilian and police cars were burned by the explosion.