Five men were sentenced to life in prison being found guilty of plotting to bomb targets in Britain, including a popular nightclub, power plants, a shopping mall and a construction company with contracts in Iraq. 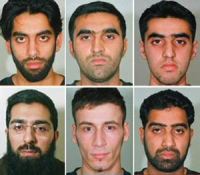 The court case  Britain's longest terror trial  revealed previously undisclosed links between the men, al-Qaida cells and the suicide bombers who launched a deadly 2005 attack on the city's transit system.

The details, which were kept secret from a jury to ensure a fair trial, showed counterterrorism agents tracking the fertilizer plotters had also watched two of the transit bombers for more than a year before they struck even placing a tracking device in the car of the ringleader Mohammed Siddique Khan. But officials failed to piece together the links in time to prevent the July 7, 2005 bombings that killed 52 people.

The revelations are at odds with statements by Tony Blair's government after the 2005 attack. Senior ministers, who a month earlier had lowered the country's alert status, said that attack was unexpected and the perpetrators unknown.

The jury deliberated for almost a month after nearly a year of testimony in the plot that involved 1,300 pounds (590 kilograms) of fertilizer that the men had stockpiled in a London storage unit.

Khyam, Garcia and Waheed Mahmood will be eligible for parole after 20 years; Amin and Akbar, after 17 1/2 years but all five were warned they could face spending the rest of their lives in jail.

Two others, Nabeel Hussain and Shujah Mahmood, were cleared of conspiracy to cause explosions.

The men were all British citizens and most had ties to Pakistan.

Khyam, considered the group's ringleader, led training expeditions to militia camps in northern Pakistan and was a key associate of Khan. As a 16-year-old, he had fled school for Kashmir and had later visited the Afghan capital of Kabul and met members of the Taliban.

Recorded conversations between the men captured a stream of consciousness speaking first of targeting and gaining access to the popular Ministry of Sound nightclub a London hotspot that draws some 1,800 revelers.

Akbar talked of bombing the club in recorded conversations, saying such clubs were "really, really big" in Britain.

"Trust me, then you will get the public talking ...," he told Khyman.

Akbar also said "terror is the best way" and "even the Quran says it."

The jury also heard a recording of a conversation between Mahmood and Khyam where the two talked about attacking the British construction firm Amec, which has contracts in Iraq and helped clear the World Trade Center and the Pentagon after the Sept. 11 terror attacks in 2001.

Mahmood also kept blueprints to gas and electricity plants while working for a utility firm another plan that involved looking for ways to cut off electricity, water and gas power supplies across Britain.

Details of the planned attacks were chilling enough, but evidence showed that the investigation of the fertilizer plot gang might have offered clues that could have tipped off police to the July 7 suicide bombers, who were planning another deadly attack.

In testimony, American radical-turned-FBI informant Mohammed Junaid Babar said Khyam and at least two of the July 7 attackers had met with Abdul al-Hadi al-Iraqi, one of al-Qaida's most senior and experienced operatives. Al-Iraqi has been transferred to the U.S. prison camp at Guantanamo Bay.

A government security official gave one-on-one briefings with reporters as the trial was nearing an end.

Agents monitoring the fertilizer plot listened in on several conversations. In one, they heard one of the July 7 bomber Mohammed Siddique Khan telling Khyam that he planned to kill non-Muslims, the security official said during the briefing, demanding anonymity to discuss sensitive details of the cases.

The two men knew each other through a network of radical clerics in Britain.

A tracking device was placed in Khan's car a year before the 2005 suicide bombings and details of his phone calls and meetings with radicals were reported to Britain's domestic spy agency, MI5, on at least four occasions, he said.

Khan also took militia training in Pakistan with at least some of the fertilizer plotters, a witness in the case and officials said.

But, lacking resources, MI5 never pieced together the intelligence, the official acknowledged.

"There needs to be that killer fact and it just wasn't there," he said, noting that Khan had used several aliases.

In 2004, Babar told U.S. officials that Khan whom he recognized from a blurred surveillance photograph had sought meetings with al-Qaida leaders. But a tip to London authorities was too vague to prompt action, the official said.

"The security service will never have the capacity to investigate everyone who appears on the periphery of every operation," Jonathan Evans, director general of MI5, said in a written statement.