The kidnappers of BBC reporter Alan Johnston made new demands in a phone call, but were turned down. 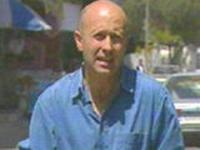 Deputy Prime Minister Azzam al-Ahmed said the kidnappers confirmed that Johnston, seized near his Gaza City apartment on March 12, is in good health.

Al-Ahmed said efforts to win Johnston's release reached a sensitive stage. "We hope it will end soon," he said. "If we don't reach an agreement, the law will take its course, whatever method we will use to end this issue which has given the Palestinians a bad image."

Al-Ahmed said the kidnappers repeatedly delivered demands in phone calls, most recently on Monday. He described the abductors as a criminal gang, but would not say whether they demanded ransom. He said that the kidnappers have been trying to present the abduction as an ideological act.

"It seems the abductors feel they are in real trouble," al-Ahmed said.. "Their demands change from time to time. From our side, all the demands that were presented were rejected."

Earlier this month, a group claimed it had killed Johnston, but never provided proof. The group called itself "The brigades of Tawheed and Jihad," a name used elsewhere by organizations linked to al-Qaida.