A pain-management doctor who prescribed large amounts of opiates and drew patients from across the country to his northern Virginia clinic has been convicted on 16 counts of drug trafficking by a federal jury. 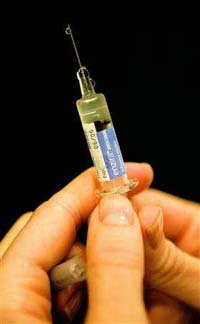 The jury acquitted William E. Hurwitz on 17 other counts on Friday, and a judge dismissed 17 others, including the most serious charge - drug trafficking resulting in death.

It was the second time in three years that a federal jury convicted Hurwitz of drug trafficking. His 2004 conviction - and 25-year prison sentence - was tossed out by a federal appeals court, which ruled that a judge improperly barred the jury from considering whether Hurwitz was acting in good faith.

Hurwitz faces up to 20 years on each count when he is sentenced on July 13.

Prosecutors argued that Hurwitz was no better than a common drug dealer who ignored obvious signs that his patients were dealers or addicts.

"Drug traffickers come in all shapes and sizes - this one just happened to wear a white coat and be a doctor," U.S. Attorney Chuck Rosenberg said in a statement issued after the verdict.

Numerous patients had prescriptions for hundreds of pills a day, and one had a prescription for 1,600 pills a day. Several of his former patients testified against him, and prosecutors played tapes of conversations in which Hurwitz seemed to know that his patients were selling their prescriptions.

Defense lawyers argued that Hurwitz was one of a handful of doctors in the country who was willing to risk persecution by authorities and prescribe the doses necessary to alleviate patients from crippling pain. Several of his former patients and their family members testified on his behalf.

Hurwitz has been scrutinized by authorities for decades, and has had his medical license suspended twice, in 1991 and 1996.

Between 1998 and 2002, Hurwitz drew more than 400 patients from 39 states to his clinic in McLean. Prosecutors said the waiting room was frequently occupied by stoned or sleeping patients with track marks on their arms.

The case against Hurwitz was part of a long-running federal, state and local investigation dubbed "Operation Cotton Candy" that netted more than 130 convictions in Virginia and elsewhere for drug trafficking and prescription fraud.

Numerous physician and patient advocacy groups supported Hurwitz, and said his case should be dealt with by state medical boards rather than criminal courts. Hurwitz received extensive pro-bono legal assistance at his second trial.