Jordanian authorities arrested a man accused of killing his 30-year-old sister on suspicion that she had a love affair, though he had earlier signed a pledge to the police that he would not harm her. 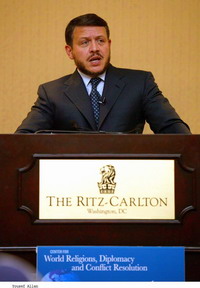 The crime, which took place in the eastern industrial city of Zarqa on Wednesday, brings to eight the total number of women killed since January in what is known as "honor crimes."

An average of 20 women are killed by male relatives each year in Jordan, a largely conservative Muslim society where men have the final say in all family matters. Many here consider sex out of wedlock an indelible stain on a family's reputation. Some women in conservative circles of the society have been killed simply for dating.

The police official, insisting on anonymity because he is not allowed to speak to the press, said the suspect allegedly sprayed his sister with seven bullets in broad daylight and fled the crime scene. The woman died instantly of her wounds, the official said.

She had been under police protection for 15 days and was allowed to go home the day she was killed, after her father and brother pledged not to harm her.

"The brother ignored his signed oath and shot her in cold blood on their way home," the official said.

A young boy nearby heard the gunshots and found the woman lying in the street, covered with blood, with some empty shells near her body.

The brother, in his mid-20s, was arrested shortly afterward and later confessed to his crime. He is to stand trial soon at Jordan's criminal court. His name and that of his victim were not revealed.

International human rights organizations have condemned honor killings in Jordan and appealed to the country's ruler, King Abdullah II, to put an end to the practice.

The government promptly abolished a section in the penal code that allowed "honor" killers to get sentences as lenient as six months in prison. Also, the government urged judges to consider honor killings on par with other homicides, punishable by up to 15 years in jail.

But attempts to introduce harsher sentences to honor killings have been blocked in Jordan's parliament, where the predominantly conservative bedouin lawmakers argue that tougher penalties would lead to promiscuity.

Queen Rania, the Palestinian-born wife of King Abdullah and an advocate of wider freedoms for women, championed several national campaigns to push for the introduction of harsher punishment for honor killings.