A 40-year-old Bosnian man has been arrested in Norway on suspicion of committing war crimes in his homeland in 1994. 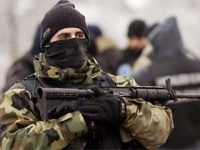 Audun Oevreboe, spokesman for national crime police Kripos, said by telephone that the man was arrested Wednesday based on an extradition request from Bosnian authorities.

Oevreboe would not identify the suspect by name or give any details about what he was suspected of.

"This is a man that Kripos has investigated for committing war crimes in 1994," Oevreboe said, declining to say how long he was investigated or where in Norway he was arrested.

"More might come out in a detention hearing on Friday," the spokesman said.

Police were requesting a court order to hold the man pending a ruling on the Bosnian extradition request.

Norwegian police last year estimated that at least 50 people suspected of war crimes or crimes against humanity were hiding in Norway.