Downed power lines, flattened houses and roads littered with debris kept many residents from returning to their homes Sunday in this rural Panhandle town as a result of tornadoes. 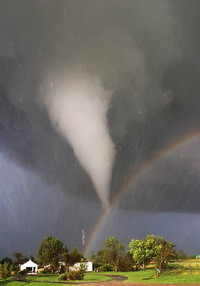 At least 14 people were injured, two of them critically, during the storms late Saturday that knocked out power to about 20,000 customers in the region, officials said.

About 50 townspeople were unaccounted for Sunday morning, Moore County Judge Rowdy Rhoades said. However, he said most of the town's 2,500 residents likely evacuated after hearing tornado sirens.

Officials were checking for gas leaks in the many homes damaged by the storm, Rhoades said.

"Anytime (a tornado) can take an 18-wheeler with a gravel dump, slide it sideways and jackknife it, it's pretty strong," he said.

The National Weather Service in Amarillo, about 60 miles (96 kilometers) south of Cactus, sent survey teams to the area Sunday to determine how many tornadoes hit the region.

At least a dozen homes and as many businesses were destroyed in Tulia, about 50 miles (80 kilometers) south of Amarillo, but there were no serious injuries, Tulia police dispatcher Ken Patton said.