A school district in Northern California was locked down Thursday as authorities searched for a man threatening to make the Virginia Tech massacre look "mild by comparison." 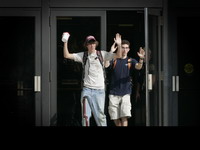 Schools in Yuba City and neighboring Marysville tightened security while police searched for Jeffery Thomas Carney, 28. Carney had told a pastor in Yuba City on Wednesday night that he planned a mass killing, authorities said.

"He had some sort of explosive device and he was going to make the incident at Virginia Tech look mild by comparison," Sutter County Sheriff Jim Denney said. "Our main emphasis, and I can't stress this enough, is to find this suspect."

Carney told the First United Methodist Church pastor and some family members that he had an automatic weapon and poison, and hoped to be killed by police as he carried out an assault, authorities said. He made no specific threat against any particular location, the department said.

Authorities said Carney is homeless but previously lived in Yuba City, about 35 miles (56 kilometers) north of Sacramento, the state capital. He was arrested in February and again April 4 on domestic violence allegations, Denney said.

School officials said in a post on the district's Web site that schools were being locked down. The move affected 17 schools and 12,000 students. Schools in the neighboring Marysville district were locked down as a precaution.

The threat followed a week of lock-downs and evacuations at schools around the country in the wake of the Virginia Tech shooting massacre.

In Kalamazoo, Michigan, a threat posted on an online blog worried Kalamazoo Valley Community College officials enough Thursday that they shut down the campus for the rest of the week, authorities said.

He said the first message appeared at 5:02 p.m. Wednesday and read: "My friends and I were sitting around yesterday discussing how we don't have any killers in our generation, then I heard about this (expletive). Thank you, God, for answering my prayers."

A second message, posted before dawn Thursday, read: "Our government kills that many people every day. ... The only reason you give a damn is because it's on CNN."

In St. Augustine, Florida, a 14-year-old high school student was charged with a felony for threatening in an e-mail between friends to top the Virginia Tech massacre by killing 100 people, St. Johns County sheriff's spokesman Chuck Mulligan said Thursday. He said the boy had made similar threats before and was being held at a juvenile detention center.