An off-duty Northwest Airlines pilot was suspected of driving under the influence of cocaine when he headed the wrong way on an interstate to avoid the U.S.-Canada border and led deputies on a chase, authorities said. 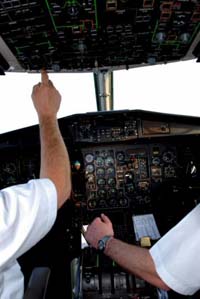 Investigators said Walter L. Dinalko, a veteran pilot of 20 years, had flown to Detroit Metropolitan Airport Saturday afternoon and then rented a Hummer that he drove about 70 miles (115 kilometers) to Port Huron.

He then drove on the wrong side of the bridge and Interstate 94, Foster said Sunday.

Deputies laid down stop sticks, which flattened the Hummer's tires. Dinalko stopped but refused to surrender to deputies, Foster said.

"He started giving them a hard time, and a tussle ensued," Foster said. Deputies subdued him and found suspected cocaine on the floor of the vehicle and in Dinalko's pocket, the lieutenant said.

Dinalko, 50, was taken to a hospital for a drug test before he was taken to jail, said sheriff's Lt. Jim DeLacy.

"He appeared to be highly under the influence of narcotics," said DeLacy, who was on the scene of the arrest.

DeLacy said a "user's quantity" of a substance suspected to be cocaine was found in the vehicle, including one opened package and one sealed package. Toxicology tests on a sample of the pilot's blood were pending, DeLacy said.

Dinalko was arraigned Sunday on charges of cocaine possession, eluding police, resisting officers and operating a vehicle under the influence of drugs, DeLacy said. He was released Sunday after posting $10,000 bond.

A message seeking comment was left Sunday at a telephone listing for Dinalko.