Darfur gunmen killed an African Union officer from Ghana and hijacked his car within meters of the peacekeeping mission's headquarters. 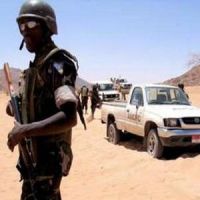 The officer was traveling alone in his vehicle when he was ambushed late Saturday, said AU spokesman Noureddine Mezni.

The ambush took place hours after U.S. Deputy Secretary of State John Negroponte visited the AU headquarters in El Fasher as part of a trip to Sudan to push the government to allow U.N. troops in Darfur to reinforce the overwhelmed AU mission.

The dead officer was the seventh peacekeeper slain this month, raising to 18 the number of AU soldiers killed since the mission deployed in 2004 to try to stop a brutal conflict between ethnic Africans and Arabs. An AU officer also has been a hostage since December.

"If this growing hostility continues, truly the (AU) mission will be compromised and we will have to take the necessary measures," Mezni told The Associated Press on the telephone.

Mezni and other AU officials said they did not know the identity of the gunmen, but would investigate the killing, which took place on the outskirts the government-controlled town of El Fasher in North Darfur, where the 7,000-strong AU mission has its headquarters since deploying to Darfur in 2004.

Mezni said more than 90 vehicles have been hijacked since the beginning of the mission.

"The AU will not let itself be dragged into the conflict," he said. "This cannot happen. ... We came here to protect civilians. If this is becoming impossible, we will take appropriate measures."

The latest attack brought to 18 the number of peacekeepers killed in Darfur, and an AU officer is also held hostage since being kidnapped in December.

Last week, one soldier from Rwanda's contingent to the AU mission was killed and an AU car hijacked during a patrol in North Darfur, which took place in a zone controlled by the Sudan Liberation Movement rebels, the AU said.

Two other injured Rwandans were medically evacuated in critical condition.

Earlier this month, five Senegalese peacekeepers were slain in an ambush earlier, which occurred a day after a general acting as the AU's deputy force commander narrowly escaped being gunned down in his helicopter as he was heading to a meeting with rebels.

More than 200,000 people have been killed in Darfur since 2003, when local rebels took up arms against the Arab-dominated Sudanese government, accusing it of decades of discrimination toward Darfur's ethnic African tribes.

The International Criminal Court says the government retaliated by arming militias of Arab nomads known as the janjaweed, and has listed 51 counts of crimes against humanity and war crimes against a Sudanese cabinet minister and a suspected janjaweed chief.

There are also almost daily reports of vehicles being hijacked, aid workers assaulted and refugees harassed throughout Darfur.

Vast sectors of the region, nearly the size of Texas, are off limits to the peacekeepers. But the Sudanese government opposes a plan by the United Nations to replace them with a 22,000-strong U.N. force.

However, Sudan and the U.N. are now edging toward a compromise deal that would allow some 3,000 U.N. troops to deploy in Darfur as reinforcement to the AU.