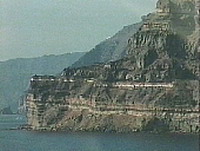 It said efforts would be made to try to recover the recorder in the hope that it would reveal details of the April 5 incident off the Greek holiday island of Santorini.

Most of the sunken hull is more than 100 meters (325 feet) below the surface.

The ship struck well-marked rocks and sank near the island's main port. Officials from the ship's Cyprus-based operator blamed human error for the incident.

State-run NET television said the a remote-controlled vessel would try to recover the data recorder, and that divers would be used if that effort fails.

The probes, operated by the Hellenic Center for Marine Research, are also being used to try to locate the missing French passengers and to stop a fuel leak from the sunken ship.

More than 120 tons of fuel and diesel - about a quarter of the total amount - have leaked into the sea-filled volcanic crater where the Sea Diamond sank.