Police detained two men with explosives near the scene of three suicide bombings in Casablanca. 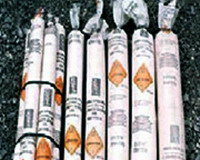 The arrests in the working-class Hay al-Farah neighborhood came a day after Interior Minister Chakib Benmoussa told reporters that authorities were still searching for "three or four suspects" allegedly linked to the bombers in an attack that stoked new fears of terrorism in the North African kingdom.

One suspect was caught after fleeing into a house, demanding food and threatening to blow himself up, said a police investigator, asking that his name not be used because he was not authorized to speak to the media.

The official news agency MAP reported Thursday that two men were detained in the course of a routine investigation. It said one suspect entered a house and threatened to blow himself up if the occupants did not give him food - though it did not indicate whether he was carrying explosives.

In Tuesday's violence, three blew themselves up with explosive belts, killing a police officer and injuring 21 others. A fourth suspect was shot dead by police while fumbling with his explosives, officials have said.

Police, acting on an informant's tip, had cornered the four suspects in a sweep linked to an investigation of a suicide attack at a Casablanca cybercafe last month that killed the bomber and injured four others.