A bomb exploded in a busy market in Thailand's restive south , wounding 11 people. 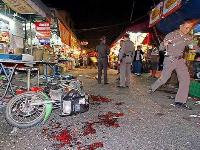 Rallying around the coffin of a woman shot and burned Wednesday in Yala province, protesters called for a meeting with the country's leaders to discuss bolstering security in a region where a Muslim insurgency has killed more than 2,000 people since 2004.

The woman's death occurred as Sonthi was visiting the same district, and the demonstrators brought the body to where he was meeting with local officials.

"Relatives, friends and all sympathizers will camp in protest here until Gen. Sonthi or Prime Minister Surayud come to meet us and ensure the security of Buddhists," said the dead woman's father, Kin Bunmat, who led the protest of 200 people at the Yala City Hall.

Surayud was already scheduled to visit the area next week.

Lt. Gen. Virot Buacharun, the army commander for the southern region, met protesters Thursday and pledged to increase security. He said the military will soon impose a rule barring male riders from sitting on the back of motorcycles to prevent drive-by shootings, a tactic often used by Muslim insurgents.

The demonstrators have several demands, including the imposition of a curfew throughout the country's three southernmost provinces where the insurgency is active. Curfews were imposed in a few select districts in March in reaction to escalating attacks.

The demonstration was the latest sign of fraying tempers among Buddhists in the deep south, the only place dominated by Muslims in overwhelmingly Buddhist Thailand.

Even as the insurgents have been increasingly targeting innocent civilians, there are no signs that the authorities are making headway in curbing their assaults.

Attackers then burned her body before fleeing. Police said the body was unrecognizable and could only be identified by her family, who recognized her motorcycle.

Buddhist villagers carried Patcharaporn's corpse, wrapped in white cloth and placed in a coffin, to the city hall.

Representatives of the demonstrators met briefly with Sonthi on Wednesday and led him to see the woman's corpse.

At the city hall Thursday, a stream of mourners including some soldiers passed Patcharaporn's closed coffin to pray and light incense. Perched atop the coffin was a graduation photo of the woman. A nearby chalk board showed a tally of Buddhists killed in the south each month.

The insurgents, who have never publicly identified themselves or their cause, have taken advantage of Muslim complaints that they are discriminated against in jobs and education by Thailand's Buddhist-dominated government. They also complain that their religion and culture are being suppressed.

Since then, bombings and drive-by shootings have been an almost daily occurrence in the deep south.