A federal judge ruled that Sheriff's deputies in Florida's Collier County did not use excessive force in an altercation with Rush guitarist Alex Lifeson. 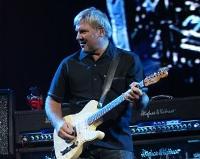 Lifeson, whose real name is Alex Zivojinovich, had sued in federal court claiming that deputies violated his civil rights by using excessive force to subdue him and his son during a skirmish at a party at the Ritz-Carlton in Naples. Tasers were used on the pair, and Lifeson's nose was broken.

But U.S. District Judge Paul A. Magnuson wrote in a ruling last week that deputies' actions "were objectively reasonable." The judge also ruled that the Ritz hotel and a security employee were not negligent in the case.

The skirmish started when Lifeson's son, Justin Zivojinovich, agitated hotel security by getting up on a platform where the house band had been performing.

Security called deputies, who escorted Justin out of the hotel with his father following behind. The two then fought with deputies in a stairwell.

Criminal charges resulted, and last year Lifeson, 53, and his son accepted a plea deal that included no jail time.

Rush, a Canadian trio, has been recording and touring together for more than three decades.