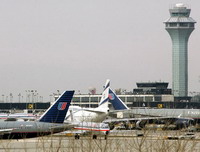 Light snow appeared on the upper Midwest on Thursday, and the day after a spring storm grounded flights and covered the roads with ice, leaving six people dead.

Some areas of northern Illinois reported up to 6 inches (15 centimeters) of snow Wednesday, National Weather Service meteorologist Tim Seeley said. Another inch to 1.5 inches (3.8 centimeters) of snow was expected Thursday morning as drizzling rain turned back to snow.

But scattered flurries should diminish later in the day with less than half an inch falling on Chicago, Seeley said.

The snowfall recorded at Chicago's O'Hare International Airport was 3 inches (7.6 centimeters), which surpassed the April 11, 1957 record for that day of 2.3 inches (5.84 centimeters).

The storm temporarily knocked out power for tens of thousands of households and businesses in the region.

Six people were killed in two separate accidents in Iowa, including a woman and her two children whose minivan collided with another minivan in the state's south-central region.

In Minnesota, slick roads apparently caused a pileup involving at least 70 vehicles along a highway just southwest of Minneapolis. At least two people were seriously injured, the State Patrol said.

As a precaution, 177 snow removal trucks hit Chicago's streets Thursday morning in anticipation of rush-hour traffic, according to Matt Smith, a spokesman for the city's streets and sanitation department.

Another inch to 1.5 inches of snow was expected in the Chicago area in the early morning hours Thursday as drizzling rain turned to snow.