An explosion tore apart an apartment complex, killing a father and his 8-month-old son, and injuring seven other people. 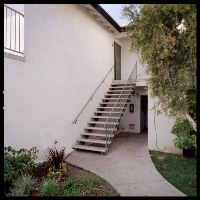 The bodies of Joshua Leigh Jackson, 18, and baby Ja'miya Jackson were found together in an upstairs bedroom, Fire-Rescue Assistant Chief Greg Anglin said.

"They probably didn't know what happened to them," Anglin said.

Windows in nearby buildings were blown out, and debris was found hundreds of yards (meters) away, officials said.

Investigators searching for the cause of the explosion and fire are checking reports that gas lines were spliced and gas was stolen, officials said. The apartment where the explosion was centered was believed to be vacant.

Thirty-eight residents of the apartment building and 24 in nearby buildings were evacuated, Anglin said.