An 18-year-old man stabbed a German priest to death in Brazil. 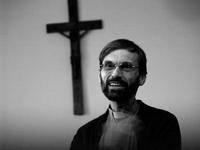 The suspect, who was captured shortly after the murder, told police he met Hermann at a mall and went home with him to look at jokes on the Internet. "The suspect said the priest rubbed him on the leg and when he was rebuffed the priest came back with a knife and attacked him, but that's just his version," Freire said.

The suspect had deep knife wounds on his hand and arm, Freire said, and the apartment showed signs of a struggle.

Freire denied local media reports that the suspect is a male prostitute who met the priest over the Internet.

Freire did not know Hermann's hometown in Germany or how long he had been in Brazil.

No one at the archdiocese in Belem was immediately available to comment on the case.