Four Serb paramilitaries were convicted of war crimes against civilians on  by Serbia's War Crimes Court. 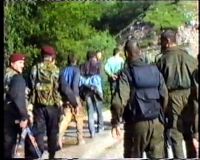 It was the first court ruling in Serbia related to the systematic killings of up to 8,000 Muslim men and boys in Srebrenica in the final months of the 1992-95 war in Bosnia  Europe's worst atrocity since World War II.

Trials of Serbs in Serbia have only become possible since the 2000 ouster of President Slobodan Milosevic. The Srebrenica case has been a key test of the ability of Serbia's judiciary to deal with wartime atrocities.

"The only appropriate punishment for such a crime is the longest one," said Serbia's pro-Western president, Boris Tadic.

Swedish Foreign Minister Carl Bildt, a former U.N. envoy to the Balkans, welcomed the verdict, saying "it shows that the countries in the formerly war ravaged region are now themselves starting to feel a responsibility for the crimes that were committed often in their names in the repeated wars of the 1990s."

The four Serbs found guilty Tuesday were seen in a video that surfaced in June 2005 when it was shown at the war crimes trial of Milosevic before the U.N. tribunal for the former Yugoslavia.

The video shows members of a notorious Serbia paramilitary unit known as the Scorpions.

The footage, recorded by a Scorpions member who apparently believed it would never become public, showed the men taking Bosnian Muslim civilians from a truck with their hands tied and lining them up on a hillside before spraying them with machine gun fire.

The verdict followed a February decision by the U.N.'s highest court, the Netherlands-based International Court of Justice, clearing Serbia of direct responsibility for the Srebrenica genocide.

But the footage, widely broadcast in Serbia as well as in Bosnia, shocked some Serbians who were in denial about the wartime atrocities committed by the Serb forces.

Of the six victims in the video, four were shot in the back. Two others were ordered to carry the bodies into a barn where they, too, were killed. The victims were residents of Srebrenica, which was officially a U.N.-protected Muslim enclave during the Bosnian war.

In Belgrade, presiding judge Gordana Bozilovic-Petrovic, who read the verdict, said the recording presented evidence that proved the guilt "beyond any doubt" and that Medic, "as the commander, had the authority to issue such an order."

The accused did not face the death penalty, which is not allowed under Serbian law.