A social worker who knew that a couple forced some of their 11 adopted children to sleep in cages avoided a jail sentence. 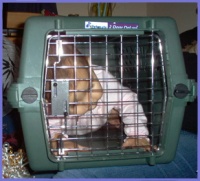 Elaine Thompson, 64, cried tears after she received a suspended three-month jail sentence and five years probation during which she cannot practice as a social worker.

"This entire situation has been tragic," Thompson said. "I'm sorry for the role that I played."

She had counseled Michael and Sharen Gravelle, who in February were sentenced to two years each in prison for four felony child endangering convictions and seven misdemeanors. They remain free on bond pending their appeal.

Thompson pleaded guilty in February to three counts of failing to report a crime. She had testified at the Gravelles' custody hearing that the children's behavior improved with use of the cages.

"This is the worst form of failure to report child abuse you can have," Huron County Prosecutor Russell Leffler said.

"She did not have the best interest of these children at heart," he said during the hearing. "She could have stopped this with a phone call. She chose not to do that."