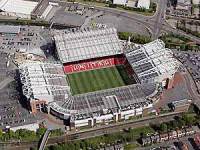 About 100 people were involved in the scuffle in which fans threw bottles and other objects at police lines outside Old Trafford.

"Some arrests have been made in order to maintain the peace at the ground," Manchester police said. "At this stage there are no reports of anyone injured.

"The trouble has involved a mix of fans from both sides."

A group of about 1,000 mostly AS Roma supporters some with "Invasion of Manchester" written in Italian on their shirts gathered around the main entrance. Some fans had cuts and other injuries, but no one was believed to be seriously injured.

"(Roma fans) charged down towards the stadium chucking bottles at United fans," United fan Rob Blanchette said. "Police beat them back into a corner."

The initial violence appeared to last only a few minutes and was quickly brought under control.

"The police started to run in our direction," Roma fan Riccardo Fartera said. "There was about 10 minutes of a not-calm situation. I saw one boy about 20 years old being hit to the ground by the police and with blood pouring down his face."

More trouble erupted later when a Roma fan threw a bottle at United fans while standing behind a police line. United fans then ran at the small group of Roma fans but were stopped by the police.

There was a heavy police presence for the match because of the trouble last week during the first leg in Rome, where Italian police clashed with United fans inside the stadium after Roma had scored its first goal.

Roma won the match 2-1 and needs only a draw in Tuesday's second leg to reach the semifinals of the competition.