Heavy fire in the West Bank city of Nablus 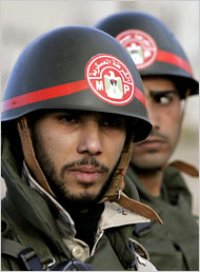 Heavy fire in the West Bank city of Nablus

The clash between the police and militants from the Al Aqsa Martyrs' Brigades terrified residents and shoppers in the bustling city center, prompting them to shutter their windows and flee the area. The militant group is affiliated with the Fatah Party of Palestinian President Mahmoud Abbas.

Police and the gunmen sped through the streets and ran over rooftops, shooting at each other. Three people were injured, at least one of them a bystander, rescue officials said.

"I saw, from where I was, dozens of Palestinian police and gunmen chasing each other and shooting," said Ghassan Tabila, a street vendor.

Tensions had been high in the city, known as a hotbed of militant activity, since police officers last week confiscated the car of an Al Aqsa militant. The group responded days later by shooting at a police car, injuring an officer. Police had put out notice that they were searching for three members of the group before the fight erupted Monday.

Fatah and the militant Hamas movement agreed last month to share power in an effort to end the deadly fighting between the two groups in Palestinian towns. But clashes between Al Aqsa and Palestinian security which is largely comprised of Fatah loyalists have been rare.