Allstate Insurance Co. policyholders Robert and Merryl Weiss blame Katrina's winds and possibly a storm-spawned tornado for demolishing their Slidell home. But Allstate and other insurers say their policies cover a hurricane's wind but not its rising water. 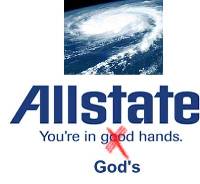 Hundreds of homeowners in Louisiana and Mississippi have sued their insurers for refusing to cover billions of dollars in damage from Katrina's storm surge.

Jury selection starts Monday in the trial of the Weiss's lawsuit, only the second Katrina insurance case to be tried so far in a federal court. They had a federal flood insurance policy and a separate Allstate homeowner's policy with limits of $343,000 (EUR256,485) for the dwelling and $240,100 (EUR179,540) for personal property.

The Weisses, however, say at least two of their neighbors were paid the full limits of their Allstate policies after Katrina destroyed their homes. The couple accuses Allstate of bad faith for not paying their own claim in full.

In court papers, Allstate attorney Judy Barrasso accuses the couple of misrepresenting their claim by demanding that the company pay them at least $34,000 (EUR25,425) for a boathouse that Allstate says wasn't located on the insured property when Katrina hit on Aug. 29, 2005.

Allstate used the same defense tactic in February, during the first federal trial for a Louisiana homeowner's Katrina insurance suit.

That trial ended abruptly when the plaintiffs, Lawrence and Elizabeth Tomlinson, dropped their lawsuit amid allegations they misrepresented their claim. Allstate said it paid the Tomlinsons more than $30,000 (EUR22,435) for living expenses after they moved into an office property that they already owned.

John Denenea, an attorney for the Weisses, said they "look forward to exposing Allstate's blatant misrepresentations."

"The Weisses were offended and embarrassed that their insurer of over 12 years, Allstate, would authorize and condone the recklessly untrue statements made by (Barrasso)," Denenea said in a written statement.

The Weisses, in turn, accuse Allstate of fabricating claims records in a "scheme" to inflate the value of their federal flood insurance claim and reduce the company's own liability for damage, according to court papers. Denenea would not elaborate on that allegation, and an Allstate spokesman declined to comment.

The Weisses say an Allstate adjuster told them in October 2005 that Katrina's winds destroyed their waterfront home on the north side of Lake Pontchartrain before storm surge washed away its remnants. Months later, however, the couple received a report from Allstate-contracted engineers that blamed storm surge for the home's destruction.

Rimkus Consulting Group., Inc., prepared the engineering report on the Weisses' home. Richard Trahant, one of the couple's attorneys, accused Rimkus of altering reports on storm-damaged homes so that claims could be denied and the company could generate more business with insurers.

"Rimkus engaged in a pattern of doing this," Trahant said Thursday during a pretrial hearing before U.S. District Judge Sarah Vance.