Caused by electrical fault and fire in a transformer yard the automatic shutdown closed the Indian Point 3 nuclear power plant. 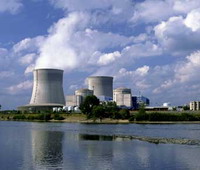 The fire, which was quickly extinguished, was outside the nuclear area of the plant and there was no release of radiation, said Diane Screnci of the Nuclear Regulatory Commission.

"The plant is stable and reacted normally," she said. "There's no impact on public health and safety."

Nevertheless, the plant, which is on the Hudson River in Buchanan, about 40 miles (64 kilometers) north of New York City, declared an "unusual event," the lowest of several safety alert classifications, Screnci said. The declaration required Entergy Nuclear Northeast, owner of Indian Point, to notify the governments of the surrounding counties.

Entergy spokesman Jim Steets said a fire in the transformer is among the events that trigger an automatic shutdown of a nuclear plant.

He said the cause of the fire was not known. It spread smoke around the area of the transformer yard, which is across a street from the plant in Buchanan, but was confined to the transformer, he said.

Indian Point 2, the other working nuclear plant on the site, remained up and running, Steets said.

The shutdown was the second this week at Indian Point 3. A water pump malfunction closed the plant down from 4 a.m. Tuesday to 1 a.m. Wednesday. It had been closed for 24 days until Saturday for scheduled refueling and maintenance.