1,200 passengers and 400 crew was being evacuated from a cruise ship off the Greek island of Santorini. 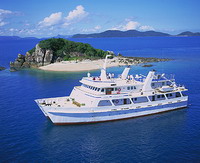 The Greek-flagged Sea Diamond apparently hit rocks and was listing near the island's main port, the Merchant Marine Ministry said.

The ministry said about 650 people have been safely evacuated so far.

More than a dozen ships were involved in the rescue effort. Six navy rescue helicopters, two military transport planes and four warships were also sent to the area, along with emergency medical crews.

Hundreds of people could be seen on the deck of the ship waiting to be rescued, witnesses said.

Thousands of tourists and residents watched the rescue effort from the island's cliffs and port.

Santorini is a volcanic island and the ship struck a reef inside the volcano's lake-like lagoon.

"We managed to get the ship away from the rocks and tugged the vessel toward the main harbor," said Santorini's regional governor, Chrysanthos Roussis. "The condition appears to have been stabilized, and the evacuation effort is going well so far."

Winds in the area were moderate.

The Merchant Marine Ministry said 1,195 passengers and 391 crew members were on board.

The Sea Diamond is operated by Louis Cruise Lines, a Cyprus-based tourism group.