The reason for the meeting between British Diplomat and with Prime Minister Ismail Haniyeh of Hamas and moderate President Mahmoud Abbas Thursday was to push for the release of a BBC journalist kidnapped three weeks ago. 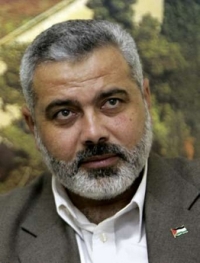 BBC reporter Alan Johnston was seized by gunmen outside his Gaza City apartment March 12. There has been no word on Johnston and no claim of responsibility by any group. He is the longest-held reporter in Gaza, which has prompted concerns about his fate.

The British consul general, Richard Makepeace, and BBC representatives headed first to Haniyeh's office, and were then to meet with Abbas.

Earlier Thursday, about 350 journalists and activists marched from their protest tent in Gaza city toward Abbas' office to protest the continued detention of Johnston.

Security guards tried to stop the protesters, scuffling with some and firing in the air. The group was eventually allowed through and rallied outside Abbas' office. "Freedom for Johnston," a banner read.