The latest incident became public one day after Police Superintendent Philip J. Cline announced he would retire early. The department has been struggling with the fallout from previous, similar tapes after one, showing an off-duty officer attacking a female bartender, appeared worldwide on the Internet and cable news channels. 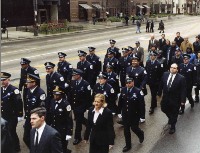 Prosecutors were reviewing the new tape and had not yet decided whether to file charges, said John Gorman, a spokesman for the state's attorney's office.

Bond would not identify the officer involved or talk about details of the video.

Until prosecutors decide what to do, "we're just not at liberty to discuss it," she said.

The only surveillance video to appear public so far showed Anthony Abbate, a 12-year veteran of the force, punching, kicking and throwing a bartender to the floor on Feb. 19 after she reportedly refused to continue serving him drinks, authorities said.

Police have faced allegations that someone tried to bribe and then threatened the bartender, a Polish immigrant, to keep her from pressing charges in the case. They also have been criticized for waiting a month to arrest Abbate, who initially was charged with a misdemeanor but was later charged with felony aggravated battery.

Six other officers were removed from street duty after they were accused of beating four businessmen in a bar on Dec. 15. They have not been charged in the incident, and the videotape of that confrontation has not been seen by the public.

Cline has said police were called to the bar about the fight but a sergeant who was among the officers involved waved them off.

Mayor Richard M. Daley has called the beating incidents "unacceptable" and said the department moved too slowly to take action. The Rev. Jesse Jackson, head of the Chicago-based Rainbow/PUSH Coalition civil rights group, urged that future allegations of police misconduct be subject to review by a civilian board.