A seven ton bull elephant killed a female elephant half his weight as visitors at an Israeli nature park looked on in horror. 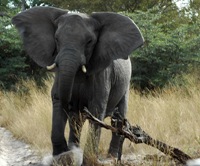 Officials at the Safari park near Tel Aviv said they were unable to stop Yossi, a 33-year-old male, from attacking Atari, the captive herd's matriarch, and trampling her to death.

"What happened to Yossi, who grew up all his life with Atari, and they always got along?" Yigal Horowitz, a veterinarian at the park, told Israel Radio. "Here and there were small fights, but they never had a fight like this one."

Elephants are social mammals, observing hierarchies in their herds and visiting the burial places of loved ones for years after their death. But scientists have recently become increasingly concerned with what they say is a rising level of violent activity among elephants.

In a 2005 essay in the "Journal of Nature," Gay Bradshaw, an Oregon State University psychologist, argued that the worldwide population of elephants is suffering from a form of post-traumatic stress disorder, making them excitable and prone to violence.

Horowitz said the nature park's staff will make a decision about what to do with Yossi after investigating the incident and consulting with outside experts. In the meantime, Bati, another female with a senior role in the herd's hierarchy, is expected to take charge of the herd.