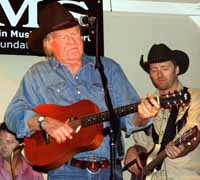 Shaver turned himself in at the McLennan County jail in Waco and was released after posting $50,000 (EUR37,430) bail, said Lorena Police Chief John Moran.

Shaver, 67, was charged with an assault and a weapons charge. His attorney, Joseph A. Turner, has said Shaver shot the man in self-defense after he left the bar and followed Shaver into the parking lot Saturday night. Turner said that Shaver did not know the man and that the stranger was drunk, aggressive and had a knife.

The shooting occurred Saturday evening outside Papa Joe's Texas Saloon, according to Lorena police. The victim was reportedly shot in the cheek.

Shaver, who lives in nearby Waco, rose to stardom in the 1970s. An acclaimed songwriter whose hits include "Georgia on a Fast Train" and "I'm Just an Old Chunk of Coal (But I'm Gonna Be a Diamond Someday)," he has recorded more than 20 albums.

Knowles said that he and Shaver did not discuss the shooting but that he wanted the country singer to know the company supports him.

"Billy Joe Shaver is an icon in the country music industry. We're not going to turn our back on him at all," Knowles said. "I personally wanted to tell him that, which is what we talked about today."