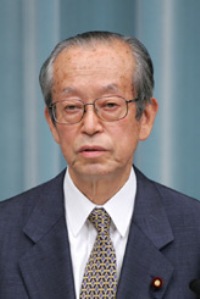 nt A Japan Airlines jetliner made a successful emergency landing in western Japan on Tuesday with one of its two engine. It was carrying 259 people with the finance minister of Japan among them.

The Boeing 777-200 plane was on its way from Tokyo to Fukuoka when the right-side engine overheated and had to be shut off, Japan Airlines spokesman Yoshiteru Suzuki said. The plane landed without incident shortly after 5 p.m. (0800 GMT).

Live television footage showed the white and red jet coast in for an easy landing at the Fukuoka airport after circling the airfield to burn off excess fuel.

Among the passengers was Finance Minister Koji Omi, who helps oversee the world's second-largest economy. The Finance Ministry said he was traveling on personal business.

The plane was carrying 10 crew members and 249 passengers, Suzuki said.