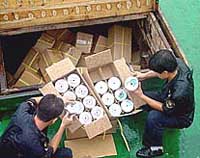 The midnight raid on the DVD factory and storage center in the city of Guangzhou turned up pirated versions of Chinese, American, Korean and Japanese movies and TV shows, according to the Motion Picture Association, which said it tipped off the authorities.

Officials also confiscated 30 machines that erase source identification codes, used to trace the disc manufacturer. Two men believed to be the managers of the facility were also detained after the bust on March 17, the group said.

Rampant piracy has long been a source of tension between China and nations such as the U.S. that have big film and music industries. China has said it is cracking down on fakes, but other countries have alleged Chinese officials aren't doing enough.

The accusation was echoed Monday by the Motion Picture Association, which represents some of Hollywood's largest movie studios, reports AP.