Ten French tourists were kidnapped in the remote desert of northern Ethiopia, one of the hottest and most inhospitable terrains in the world, a businessman and a tour operator who work in the region said. 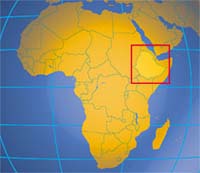 The tourists were in a convoy of four vehicles in Dalol, 800 kilometers (500 miles) northeast of Addis Ababa, traveling to salt mines in the Afar region on Thursday, when they were kidnapped, said the businessman.

Both he and a tour operator spoke on condition of anonymity because of the issue's sensitivity.

One tourist escaped, reached another tourist group and made a satellite phone call to authorities to report the kidnapping, the businessman said.

"Apparently something has happened, but we don't know the nationalities of the hostages and we need to confirm what is going on," he told The Associated Press.

The Afar region - where the famous Ethiopian fossil of Lucy was discovered in 1974 - has an average annual temperature of 94 degrees Fahrenheit (34 Celsius) year round, but the temperature often soars much higher.

Bereket Simon, special adviser to Prime Minister Meles Zenawi, said he was checking into the situation, but could not confirm anything as yet.

A tour operator who has tourists in the area was also aware of the details and said the group was assumed to be kidnapped, the AP says.

The operator said that the tourists were clients of Origins Ethiopia, a new tour agency specializing in Afar, and officials of the company had told him that they have been unable to contact the tourists.

The tourists traveled with two armed police and an Afar guide, the operator said.

They left Mekele on Sunday for a two-day drive to Hamedali, a remote village that is the last staging post before visiting the salt lakes, the operator said.

Then they went on a two-hour drive to Dalol to visit the salt mines and were supposed to return to Hamedali, he said.

Bandits and a small Afar rebel group operate in the area the tourists visited, which is known for its difficult terrain. The government requires all convoys to have a minimum of two cars and always travel with armed guards.