A former nurse who tried to kill her terminally ill mother to end her suffering will be struck off New Zealand's health practitioners' register after the High Court on Tuesday upheld an appeal by the nation's nursing professional body. 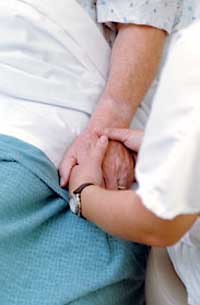 A health practitioners' tribunal had ruled last year that Lesley Martin, who served half of a 15-month sentence for trying to kill her dying mother Joy, would have to undergo a series of strict tests to determine her competency before she could return to nursing.

Martin had been an intensive care nurse but left the field in 1997, two years before her attempt to end her mother's life.

Judge Gendall said the tribunal was clearly wrong in imposing conditions on Martin, rather than striking her off.

He said his decision was based on the fact that Martin had made a premeditated decision to euthanize her mother, and had said afterward she would do the same again. He said Martin's decision was not a matter of her competence.

In 1999, Martin tried to end her 69-year-old mother's suffering by giving her a morphine overdose. When this was not successful, she tried to suffocate Joy, terminally ill with bowel cancer, with a pillow.

A post-mortem report said the mother died of respiratory arrest, possibly due to morphine poisoning or pneumonia. A police homicide inquiry found that Martin and later a hospice nurse had both injected the sick woman with morphine.

Martin said Tuesday that she could not appeal the decision because there was no error of law in the judge's decision.

"What we're seeing here is a very legalistic approach to the human condition (and) there's really not a lot I can do about that," she said.

Martin said she was enrolled at university studying psychology and would not return to nursing.

Prosecutors took action against Martin only after she published a book, "To Die Like a Dog," in which she wrote of her experiences caring for her dying mother and her attempts at mercy killing.

Martin was convicted of attempted murder and imprisoned in April 2004, and she lost an appeal in February 2005.

The case ignited fierce debate in New Zealand over the right to die and whether or not euthanasia should be legal.

Martin said Tuesday she was not a threat to society and would not have attempted to euthanize someone other than her mother, reports AP.

"I was clearly nursing my mother as her daughter. I'd left nursing in 1997 and this was two years later that I was caring for my mum."