A Long Beach man who committed two murders, one of them while behind bars, was sentenced to death by a judge who called him "a Houdini in jail." 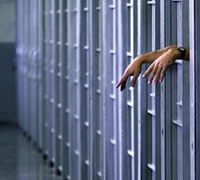 Santiago Pineda, 25, was sentenced Thursday for choking and running down Juan Armenta in 2002 after the man had confronted him about taking his car. In 2004 he killed Raul Tinajero, who had testified against him about the first killing.

Authorities said Pineda managed to leave his cell and roam the downtown Men's Central Jail for hours before entering another cell and strangling Tinajero.

Pineda also was able to get out of the county jail in 2003, apparently by stealing another inmate's wristband, said Deputy District Attorney Lesley Klein. He was taken to the West Hollywood sheriff's station, where the other inmate worked as a trustee, before he was caught, Klein said.

"You're a Houdini in the jail you seem to be able to get around all of the obstacles placed before you," Superior Court Judge William R. Pounders said in court.

"What's so equally astonishing is your willingness to attack people without provocation and your viciousness in taking their lives," the judge added.

He denied a defense motion for a new trial, reports AP.

In December, jurors convicted Pineda of two counts of first-degree murder with special circumstances of murder during the commission of a robbery, murder of a witness and multiple murders, which made him eligible for the death penalty.

Pineda's lawyers had urged jurors to recommend a life sentence without parole, saying he was affected by growing up in an abusive family and by early exposure to drugs and alcohol.