An 88-year-old man has become the 21st victim of the deadly tornadoes that struck central Florida earlier this month, officials said Thursday. 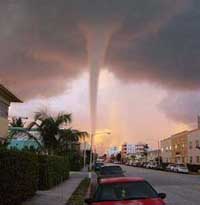 Albert Gantner died Wednesday in a hospital from injuries he suffered when a tornado destroyed his home in the middle of the night, Lake County officials and son Roger Gantner said.

He and his wife, Doris, lived in a Lady Lake mobile home belonging to his son. Doris Gantner, 81, was killed the night of the Feb. 2 storms.

Relatives found Albert Gantner about 50 yards from his wife. He suffered a concussion, a broken collarbone and broken vertebrae, his family has said.

He battled Parkinson's Disease and had been confined to a wheelchair for the last several years, reports AP.

Including Gantner, the storms have left 21 dead and hundreds homeless in a 30-mile path in central Florida.