Fatah fighters stormed a Hamas-affiliated university on Friday morning for the second time, setting buildings on fire, dealing a sharp blow to Hamas' prestige and threatening to escalate an already raging battle between the two factions in the Gaza Strip. 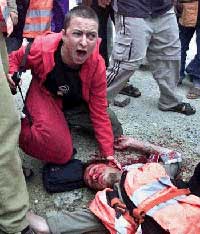 A new round of heavy fighting throughout Gaza killed 10 people Friday including a woman and three children making a total of 17 since Thursday afternoon, as gunmen waged battles in the streets with mortar shells, rockets and heavy machine guns.

Thousands of Gazans huddled in their homes to escape the crossfire from the resurgent violence, which destroyed a brief truce between Fatah and Hamas. Health authorities said they were running out of blood to treat the wounded.

"I call on all parties in Gaza to stop these actions that harm the Palestinian people," he said.

More than 100 Palestinians have been killed in internal violence since Hamas won parliamentary elections last year and formed a Cabinet. In the wake of the election, Abbas took control of the security forces and Hamas established its own militia. The two forces have fought repeatedly in the streets.

In another effort to end the fighting, Abbas was to travel Tuesday to Saudi Arabia for talks with Hamas' supreme leader, Khaled Mashaal, on forming a national unity government, said Jamal Shobaki, Palestinian ambassador to Saudi Arabia.

Previous rounds of talks have ended in failure and often led to new waves of bloodshed.

On Friday afternoon, Fatah forces raided a Hamas stronghold, the Islamic University in Gaza City, setting fire to two buildings and sparking a heavy firefight with Hamas forces. Masked men in black uniforms ran through the campus and took up positions on the roof of the school's mosque.

The attack on the university, a Hamas stronghold, was a serious blow to the Islamic group's prestige. Hamas gunmen were heard pledging revenge for the attack.

The university was also a target during a 1996 crackdown on Hamas by the Preventive Security Service, which found weapons and explosives inside the university compound.

The raid Friday was the second in two days. On Thursday, Fatah said it had burst into the campus and arrested seven Iranian citizens, while an eighth committed suicide. The security official spoke on condition of anonymity because of the sensitivity of the issue. He offered no proof.

The Al Aqsa Martyrs' Brigades, a Fatah-affiliated militant group, said it had carried out the raid of the university with the security forces and accused Hamas of using the campus to manufacture and distribute weapons.

Hamas spokesman Ismail Radwan denied the presence of Iranians at the university and called charges that it was used for military purposes "ridiculous."

"The university has absolutely no business in politics, or military work," he said.

In other violence, 50 officers from Abbas' presidential guard surrounded the Hamas-led Interior Ministry on Friday and exchanged fire with Hamas gunmen guarding the building. Outside of Gaza City, Hamas militants launched mortar shells at a Fatah training base in an attack that wounded 30 recruits, security officials said. One shell missed the base, hitting a nearby house and wounding two children inside.

The roads of Gaza were nearly empty, sealed off by makeshift roadblocks of rubble and garbage. Only masked security officers, some with hand grenades clipped to their ammunition vests, were visible in the streets. The sound of gunfire mixed with the call to prayer, but the mosques were mostly empty for Friday afternoon prayers as people stayed at home in fear.

A total of 183 people were wounded since Thursday afternoon, the Health Ministry reported.

Health officials appealed for blood donors. Ambulances had come under fire and one rescue worker was lightly injured by a ricocheting bullet, they said. A Red Crescent hospital near a security base in Gaza City was hit in crossfire and its windows and gates were pocked by bullet holes.

Hamas gunmen blew up the Fatah-affiliated Voice of Labor radio station in the northern town of Jebaliya on Friday morning after a five-hour siege, according to Rasem Bayri, who heads the Palestinian Federation of Labor Unions. The Hamas fighters pulled down a Palestinian flag flying on the roof of the building and put up a green Hamas flag, Bayri said.

The new violence came just three days after Egyptian mediators persuaded the warring factions to agree to a truce.

The latest clashes began Thursday when Hamas gunmen ambushed an official convoy guarded by the Fatah presidential guard in the Bureij refugee camp and hijacked two trucks filled with tents, medical kits and toilets, security officials said. The United States and some Arab countries had pledged to give equipment and training to the security forces loyal to Abbas, reports AP.

Col. Burhan Hamad, the head of the Egyptian security team in Gaza that negotiated the truce, denounced the attack on the convoy as "unjustified," angrily blamed Hamas and appealed to the warring factions to stop the new clashes.

Meanwhile, Israeli troops killed two armed Palestinians near the West Bank city of Ramallah early Friday. Palestinian security officials said the men were police officers on a routine patrol. The army said two armed men in civilian clothes approached troops on an overnight raid, and the soldiers opened fire when the men refused to put down their weapons.