Rescue crews recovered three bodies from a minibus entombed under tons of earth and rubble, bringing to six the number of dead retrieved from the collapse of a subway station construction site. 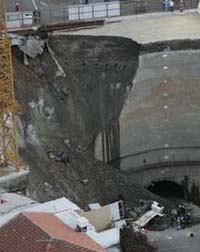 Near midnight, rescuers removed the body of another man from inside the vehicle, said a Sao Paulo fire department spokesman who declined to be identified in accordance with department policy.

Authorities were still searching for the body of a pedestrian reported missing since last Friday, when a 40-meter-wide (130-foot-wide) circular hole lined with concrete gave way without warning, swallowing pedestrians, dump trucks and a minibus driving by the site. Several nearby homes were damaged and must now be torn down.

The Sao Paulo state attorney general's office has said it suspects mistakes by private builders, rather than heavy rains, caused the collapse of the construction site.

It also warned it may halt work on the station, part of a US$1.4 billion (Ђ1.1 billion) subway line being built in South America's largest city, while it investigates the collapse.

"A serious mistake was made, and what we have to do now is determine if it was in the project or in its execution," Sao Paulo state Attorney General Rodrigo Pinho said on Wednesday.

The Via Amarela Consortium building the subway line has suggested that rain was the principal cause for the accident. But Pinho called that idea "ridiculous," saying construction companies regularly factor into their building plans the heavy rains Sao Paulo experiences during the South American summer from November through April, reports AP.

Experts said authorities should also investigate whether there were sufficient government inspections on the construction of the line and whether cost-cutting may have played a role.

"Outside monitoring may have detected engineering flaws that went undetected before the tragedy," said Waldemar Hachich, a Brazilian engineer who is also vice president of the London-based International Society for Soil Mechanics and Geotechnical Engineering.

The 13-kilometer (8-mile) Yellow Line of Sao Paulo's subway system will become Sao Paulo's fifth metro line and is scheduled for completion in 2012.