A British man wanted in the United Kingdom for the rape of an 8-year-old girl has been arrested in Thailand, police said Tuesday. 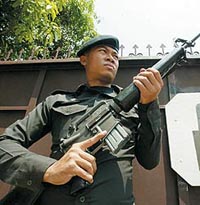 Sean McMahon, 45, was arrested Monday at his Bangkok apartment following a request from British authorities, Police Lt. Gen. Kamronwit Thoopkrajang said. He did not provide any additional details on the arrest.

McMahon allegedly repeatedly raped an 8-year-old girl between January 1997 and September 1998 and was arrested in April 1999 for the crimes in the town of Turbay in Britain, Kamronwit said. He was released on bail and disappeared, he said.

"The suspect will be repatriated back to England to face the charges in accordance with the extradition treaty (between the two countries)," said Kamronwit, adding that a Thai court is expected to take up the repatriation request on Wednesday.

McMahon remains in police custody and is expected to appear at the repatriation hearing.

Kamronwit said it was unclear when McMahon came to Thailand, though police believe he was working as an English teacher for several years in the country.

With minimal screening and ready access to children, teaching English has been a popular job for pedophiles in Asia.

Also last year, an Australian who taught English in Jakarta, Indonesia, was charged with molesting street children. He told police he videotaped at least 50 teenage boys.

Another Australian teacher who faced sex allegations at home committed suicide last year in Indonesia, where he also was accused by human right activists of abusing children.