A crowded carriage of an Indonesian passenger train derailed and plunged into a dry river bed just after midnight Tuesday, killing five people and injuring more than 250, a police officer said. 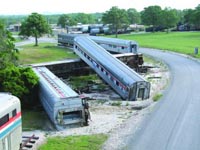 The carriage fell around 6 meters (19 feet), flipping onto its roof in the river bed surrounded by lush forests, TV footage of the accident near the Central Javanese town of Purwokerto showed.

A 3-year-old child was among those who died, said police Sgt. Sunaryro, adding that most of the injuries sustained were not serious.

Some of the injured were in other carriages, at least two of which slipped off the rails but did not turn over or drop any distance when the train jolted to a halt, said Sunaryro, who goes by a single name.

The carriage was packed with passengers, one injured survivor told Metro TV.

"It was so full, you could not walk from one end of the carriage to the other," she said in an interview from her hospital bed. "People kept pouring on whenever the train stopped." The station did not identify her by name.

The train was traveling from the town of Solo to the capital, Jakarta, Sunaryro said, reports AP.

It is not uncommon for economy class carriages to carry up to 200 people.