A South Korean ship collided with a North Korean fishing boat in waters north of the sea border, leaving three fishermen missing, an official from the South said Tuesday. 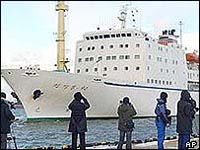 Four North Koreans were aboard the fishing boat, but only one was rescued. North Korean authorities detained the South Korean ship and its 10 crew are being held by for questioning, Chang said.

The two Koreas remain divided after the 1950-53 Korean War ended in a cease-fire, not a peace treaty, but relations between the North and South have improved since a 2000 summit between their leaders.