A powerful earthquake struck off southwestern Taiwan on Tuesday, triggering a potentially destructive tsunami that was headed toward the Philippines on the second anniversary of the waves that killed more than 200,000 in southern Asia, seismologists said. 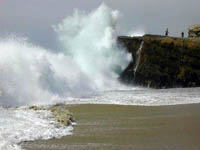 No deaths were immediately reported.

Japan's Meteorological Bureau said the quake triggered a one-meter (3.3-foot) -high tsunami that was headed toward the eastern coast of the Philippines, the AP reports.

"There is a possibility of a destructive local tsunami," the bureau said, saying waves were expected to hit Basco in the Philippines.

"However at some coasts, particularly those near the epicenter, higher tsunami may arrive," it said. "Authorities should be aware of this possibility."

The Hawaii-based Pacific Tsunami Warning Center said there was no threat of a destructive Pacific-wide tsunami, based on historical earthquake and tsunami data, but that it would not know for about an hour what the threat might be to Taiwan or the Philippines.

The quake hit on the second anniversary of a massive earthquake off Indonesia that triggered a powerful tsunami in the Indian Ocean which killed 230,000 people in a dozen countries.

Tuesday's quake was felt throughout Taiwan. It swayed buildings and knocked objects off the shelves in the capital, Taipei, in the northern part of the island.

Phone lines were cut in the southern cities of Kaohsiung and Pingtung, possibly hindering reports of damage by residents, the CTI Cable News reported. Several high-rise hotels swayed violently in Kaohsiung, it said.

The tremor was centered at sea about 23 kilometers (13 miles) southwest of Hengchun on the southern tip of Taiwan, the bureau said. Hengchun is about 450 kilometers (260 miles) south of Taipei.