A businessman pleaded guilty to aiding and abetting in the wiretapping case against a former private eye to the stars. 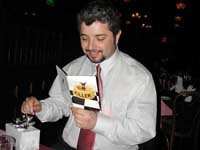 Daniel Nicherie, 46, on Tuesday was the seventh person to plead guilty in connection with allegations of a conspiracy involving wiretapping and digging up dirt on people, including such celebrities as Sylvester Stallone.

Nicherie admitted in federal court that he authorized private eye Anthony Pellicano to intercept the telephone conversations of a man he was in a business dispute with. Prosecutors alleged that Nicherie listened to the intercepted conversations and translated those talks at Pellicano's office.

Under a deal with prosecutors, Nicherie also pleaded guilty to wire fraud, pension fraud and money laundering in a separate case in which he was accused of bilking an investor out of $275,000 (Ђ207,600) and transferring $109,000 (Ђ82,300) in proceeds to his bank account.

Nicherie's attorney, Kiana Sloan-Hillier, declined to release details of the plea deal. Nicherie was expected to receive "considerably less" than the 35-year maximum penalty for the charges, she said.

Sloan-Hillier said her client agreed to the plea deal because he was anxious to get out of custody and see his family.

"He's a father, he has children, one of whom is ill," she said outside court. "He's trying to do the right thing. He's trying to get home to them."

Fourteen people have been charged in the wiretapping case, including Nicherie's brother, Abner, who prosecutors said was also in a business dispute with the man who was wiretapped.

By entering his plea Tuesday, Daniel Nicherie was not implicating his brother, Sloan-Hillier said, reports AP.

Prosecutors contend Pellicano illegally wiretapped the phones of such people as Stallone and Keith Carradine and bribed police officers to run the names of more than 60 people, including comedians Garry Shandling and Kevin Nealon, through government databases. According to court documents, the information gathered was used to get dirt for threats, blackmail and in some cases to secure a tactical advantage in litigation.

Pellicano has pleaded not guilty to racketeering and wiretapping charges and is scheduled for trial in August.