French police have arrested a man who tried to sell what he claimed were strands of hair and tiny pieces of funeral cloth from the mummy of Egyptian Pharaoh Ramses II on the Internet, judicial officials said Wednesday. 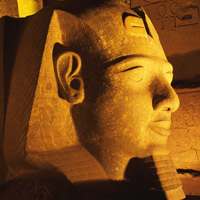 The man, identified as Jean-Michel Diebolt, had allegedly obtained the pieces after his late father, who had been a French researcher, analyzed the body and 3,200-year-old mummy in the 1970s, the officials said on condition of anonymity because the case is ongoing.

The 50-year-old suspect, a postman who also writes for a local newspaper, was detained late Tuesday at his home in the town of Saint-Egreve, a suburb of Grenoble in southeast France, the officials said.

Police seized a dozen small plastic sachets and boxes containing minuscule samples of hair and cloth that he alleged came from Ramses II.

Diebolt's wife, Sonia, insisted in an interview that the pieces were authentic and that she was unaware whether the late scientist had the right to possess them.

Egypt's antiquities chief, Zahi Hawass, told The Associated Press in Cairo that he had sent a letter to France's ambassador "wondering if those claims are true" and "saying that we want the hair back."

If confirmed, Hawass said France should carry out "a big investigation into the matter."

The French Foreign Ministry said it was closely monitoring the situation, and an investigation was under way, reports AP.

The mummy of King Ramses II, who ruled Egypt from 1270 to 1213 B.C., is conserved at the Grand Museum of Cairo. In 1976, the remains left Egypt for the first time, sent to France for treatment to stop the spread of a rare fungus that had been eating away at the mummy.