Woman accused of microwaving her baby to death

A woman was arrested on suspicion of murdering her newborn daughter by microwaving the baby in an oven. 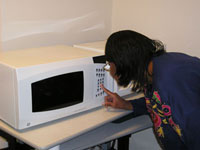 Woman accused of microwaving her baby to death

China Arnold, 26, was jailed Monday on a charge of aggravated murder, more than a year after she brought her dead month-old baby to a hospital. Bail was set Tuesday at$1 million (Ђ760,000).

"We have reason to believe, and we have some forensic evidence that is consistent with our belief, that a microwave oven was used in this death," said Ken Betz, director of the Montgomery County coroner's office.

He said the evidence included high-heat internal injuries and the absence of external burn marks on the baby, Paris Talley.

Arnold was arrested soon after the baby's death in August 2005, then was released while authorities investigated further. Betz said the case was difficult because "there is not a lot of scientific research and data on the effect of microwaves on human beings."

The death was ruled homicide by hyperthermia, or high body temperature. The absence of external burns ruled out an open flame, scalding water or a heating pad as the cause, Betz said.

Arnold's lawyer, Jon Paul Rion, said his client had nothing to do with her child's death and was stunned when investigators told her that a microwave might have been involved.

"China as a mother and a person was horrified that such an act could occur," Rion said.

The night before the baby was taken to the hospital, Arnold and the child's father went out for a short time and left Paris with a baby sitter, Rion said. The mother did not sense anything out of the ordinary until the next morning, when the child was found unconscious, Rion said.

The baby's father, Terrell Talley, 26, said his daughter was fine when he and Arnold arrived home after leaving her in the care of the baby sitter, his sister.

"When I went in the house, my baby was sitting in the car seat; she was asleep and she was alive," he said. "The baby sitter ain't had nothing to do with it."

A message seeking comment was left for his sister, Lionda Talley.

In 2000, a Virginia woman was sentenced to five years in prison for killing her month-old son in a microwave oven. Elizabeth Renee Otte claimed she had no memory of cramming her son in the microwave and turning on the appliance in 1999. Experts said that Otte suffered from epilepsy and that her seizures were followed by blackouts.