A German trucker being held over the death of five prostitutes in Spain and France has told investigators he killed a sixth woman, in the former East Germany in the 1970s, prosecutors said Tuesday. 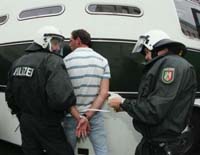 The 47-year-old was arrested Nov. 17 in Cologne on a warrant issued by Spanish authorities investigating the killing of a prostitute near Barcelona.

Last week, prosecutors in the Bavarian town of Hof said the man had confessed to killing five prostitutes three in Spain and two in France between 1999 and 2006, reports AP.

On Tuesday, they said he also has told them that in 1974, at the age of 15, he killed a young woman in Plauen, just over Germany's former east-west border. At the time, the case was registered in East Germany as a suicide.

It is unclear when the man, whose name has not been released, might be extradited to Spain. Hof prosecutor Gerhard Schmitt said that the case in Plauen might make it possible to try him in Germany.