An angry crowd demanded to know why police officers killed an unarmed black man on the day of his wedding, firing dozens of shots that also wounded two of the man's friends. Some called for the ouster of the city's police commissioner. 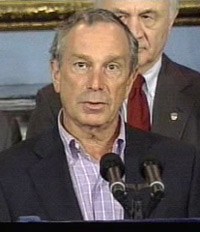 At a vigil and rally on Sunday, the day after 23-year-old Sean Bell was supposed to have married the mother of his two young children, a crowd led by civil rights leader the Rev. Al Sharpton shouted "No justice, no peace."

At one point, the crowd of a few hundred counted off to 50, the number of rounds that are estimated to have been fired.

"We cannot allow this to continue to happen," Sharpton said at the gathering outside Mary Immaculate Hospital, where one of the wounded men was in critical condition. "We've got to understand that all of us were in that car."

Some in the crowd called for the ouster of Police Commissioner Raymond Kelly, yelling "Kelly must go."

The police officers' group 100 Blacks in Law Enforcement Who Care said it was issuing a vote of no confidence in Kelly over the shooting.

Paul Browne, chief spokesman for the NYPD, said Sunday: "We are continuing to look for additional witnesses to shed light on the incident, and assisting the district attorney's office with its investigation."